Ye Olde Table Lodge, held on or near the Spring equinox, celebrates Masonry through recreations of folklore and historical events, and is considered by many to be the outstanding Table Lodge in all of New England — and perhaps the entire United States.

Beginning as a simple Table Lodge (an 8 course meal with toasts, following a prescribed Masonic ritual), certain Lodge members suggested that the evening would be more interesting if the event followed a different theme each year. The theme events began in 1992 — corresponding with Operation Desert Storm — with a salute to United States war veterans. That evening, in a spontaneous gesture of goodwill, RW Russell Kawa of Ionic No. 28 in Greene, RI passed around items for the brothers to autograph, as a memorial to the enjoyable evening. Ever since that evening, some memento has been provided each year for all the participants to sign, after which it has been deposited in Moosup Lodge’s trophy case as a memorial.

In 1993 a massive two-handed broad sword served as the keepsake, with every brother engraving his name in the blade. RW Robert Raymond penned a sililoquy likening the sword and its uses to Masonry — which ‘cuts away the vices and superfluities of life’. With that began another event tradition: a narrative outlining the evening’s theme and bringing meaning to the memorial item.

The 1994 Table Lodge was a watershed event, bringing it front-and-center in Connecticut Masonry. For the first time ever, the Moosup Table Lodge was attended by a sitting Grand Master: MW Kenneth B. Hawkins of Ansantawae Lodge. To accommodate the increased demand for tickets, the Table Lodge was moved from the dining hall into the lodge room, increasing seating capacity from 64 to 108. Elaborate props transformed the lodge room into a medieval castle, replete with suits of armor, shields, swords, and banners, for ‘The Feast of the Holy Grail’. This also marked the first year that the theme was exemplified through play-acting, as — backed by thunder and lightning — a Merlin-like ‘Guide of the Keep’ materialized to summon the Holy Grail forth. Floating down from the ceiling, the steaming Grail was captured by the Guide in a 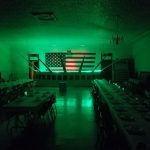 receptacle that had been engraved by all the brothers in attendance. Gushed MW Hawkins later, “This is just like Broadway!” In 2017, The theme was “based on” the Statue of Liberty and the several masonic connections that came together to procure her place in New York Harbor.

While the theme changes each year, the recipe has been the same since 1994: elaborate props, play-acting, theme narratives, an engraved keepsake and a great meal. More importantly though, has been the camaraderie and friendship that the brothers have shared each year.

If you are interested in attending Ye Olde Table Lodge, seating is limited, and tickets are sold in advance only. Contact Moosup Lodge at the below address or via e-mail for details and information. Previous years’ attendees are given first preference to purchase the same number of tickets for the following year. New requests are placed on a waiting list until previous attendees have had their opportunity.