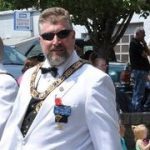 Back in March of 2004 an group of brothers stood around the kitchen of Moosup Lodge 113 and talked about ways to help the, then almost destitute, building corporation and lodge out of a tough spot. Some ideas were to have various dinners and a Fishermans Breakfast. Dinners were planned and done and then, in 2006 brother Ken Sheldon decided to take the Fisherman breakfast in a different direction. Plans were made to start doing All You Can Eat Breakfasts every other Sunday. The idea was that, after the lodge and building corporation became healthy, we would start doing breakfasts to do “What Masons Do”, be charitable. In the spring of 2006, brother Ken Sheldon and a host of other Moosup Lodge brothers started putting on a wonderful breakfast that is all so well known today. Regular breakfasts start up in October and end in early June, except for the special VJ Day Breakfast on the day of the Moosup Connecticut VJ Day in August(August 13, 2017). Over the years, many brothers that have helped out with the cooking and service parts of the breakfasts. Right Worshipful Brother Ken retired from the breakfast in 2013 to become more involved with other aspects of life and Worshipful Brother Brian Keith took the reins of being Breakfast Chef, sharing cooking duties with Brother David MacLelland. The current kitchen lineup consists of Brian and David along with Brothers Dan Buchanen and Chad Dufault with Chris Britland as a standby. The face, or front, of the breakfast is shared by Brothers Ben Burdick, Scott Fields, Tim Gahner, Worshipful Brothers Charles Carpenter and Chris Carrott and Right Worshipful Brother Jim Verge. As of April 2017, fifty percent of the breakfast proceeds go to local non-profit charitable organizations. It’s interesting to see how one idea can morph into something like the All You Can Eat Breakfast.

To enjoy an All You Can Eat Breakfast, please watch for notices on the Moosup Lodge 113 facebook page at https://www.facebook.com