Freemasonry – A Way of Life

As the oldest, largest, and best-known fraternal organization in the world, Freemasonry opens its doors to all who endorse its teachings. A strong belief in family, community, pride in our country, and sound ethical and moral values are what distinguish the Masonic fraternity. Our strength lies in the unity of our conviction to these ideals.

Freemasonry is the oldest fraternal organization in the world. It is dedicated to promoting improvement in the character of its members. A Mason is taught to be a good citizen. To be of good character. To care for those less fortunate, and to give back to his community.

The Masonic fraternity contributes over $1 Billion each year to its philanthropic pursuits. Over $750 Million of that in the United States alone. The handicapped Children’s and Burns Hospitals sponsored by Shrine Masons are world famous for their ability to help those most in need.

Freemasonry traces its roots to the Middle Ages. It is from associations of stone masons, who built the magnificent cathedrals, castles, and monasteries of Europe that the fraternity started. These groups, eventually, began to accept members who were not actual working masons. At that time, they adopted the term “Accepted” Masons, and Freemasonry was born.

Is Masonry A Religion?

No, it is not a religion. This is not to say that masons do not have religious beliefs. One of the tenets of the Masonic Fraternity is that its members are free to express their beliefs in the religion of their choice. However, it is also a condition of membership that each recognize that the wonders of the universe are not here as a result of our doing. But rather as a result of a Supreme Being, who brings order and purpose to our existence.

Is Masonry A Secrety Society?

This is a widespread misconception, and is completely untrue. The so-called secrets of Freemasonry have actually been in print for well over a century. The fraternity does nothing to hide its existence, its purpose or its membership. The lessons taught in our meetings are meant for the improvement and education of our members. As such, there are portions of these lessons that are not discussed with those outside of the fraternity.

A Grand Lodge is the governing body for a series of Local Lodges. The Local Lodge is where individual members belong. It is also where instruction is given and the actual work of the Fraternity is conducted. The first Grand Lodge was founded in London, England in 1717. It is from them that other countries petitioned for their own charters. They formed into groups, establishing their own Grand Lodges, which in turn gave charters to Local Lodges. Today, there are more than 150 Grand Lodges worldwide with a collective membership of more than 6,000,000.

What Are The Requirements For Membership?

Membership in the Masonic Fraternity is an act of free will. A man must ask for the opportunity. The potential member must be at least eighteen years of age, of sound moral character, and able to express his belief in a Supreme Being. One member of the Local Lodge being petitioned, as well as one other Mason, must be willing to sign his petition. His election is by unanimous consent. 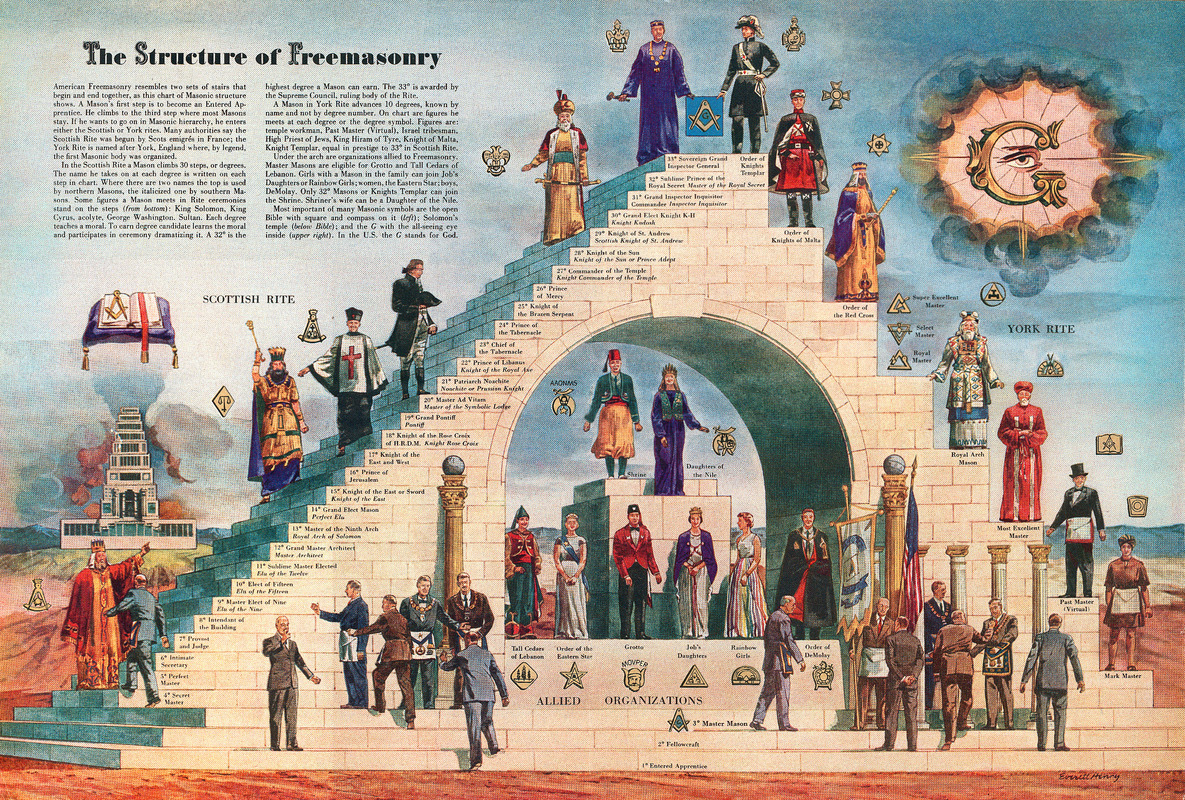 Once admitted, Freemasons begin an upward trajectory to cement their place within the lodge they have just been welcomed into. Most lodges split brothers into three significant degrees – entered apprentice, a fellow of the craft, and master mason.

However, in many lodges, there are significantly more degrees, sometimes even hundreds. These additional degrees are superimposed on the three major divisions, and such practice is not uniform in lodges across the world.

Most lodges today practice what is known as Anglo-American Freemasonry that is open only to men of good repute. However, it’s important to note that there are many variants of Freemasonry, and the practice can differ significantly in different countries.

Symbolically, the structure of Freemasonry resembles two sets of stairs that begin and end together, overseen the Masonic Eye. After being welcomed as an entered apprentice, most masons wish to climb to the third level, where most masons remain for their time in the fraternity.

In the US, if the Mason wishes to move into the Masonic hierarchy, he must enter what is known as the Scottish or York rites, wherein he can attain many prestigious titles depending on his contribution to the fraternity.

Regarding ceremonies and rituals that are conducted at Masonic lodges, they are similar in form to the gathering of any other society or community interest group. A register is called, minutes are taken, and updates on charitable and social events are shared and discussed openly by all members in attendance.

However, it is not the regular meetings that capture the outside world’s attention. It is the secret ceremonies in which members are initiated that inspire the imagination.

It is widely known that, during initiation ceremonies, a series of structured ritual dramas are used to educate new recruits on the inner workings of Freemasonry. These rituals are unique and spectacular and feature ceremonial garb and much symbolism that is unique to the lodge and the brotherhood of Freemasons more generally.

As a Mason, you are expected to participate in both general meetings and ceremonies. Your attendance is an integral part of your journey from entered apprentice through to the hierarchy of the Freemasonry brotherhood.

The world is awash with famous people who are also Freemasons, particularly in political life. Supposedly, 14 of the 45 US presidents have been Freemasons, including George Washington, Theodore Roosevelt, Harry Truman, and Gerald Ford.

Freemasonry’s link to prominent American political figures has led many conspiracy theorists to believe that they work hand-in-hand and that Freemasons’ wishes actually influence government policy.

Many theories focus on the first book of American Masonry that was published in 1734, as Benjamin Franklin wrote it.

While there’s not a great deal of evidence supporting the claims that Freemasonry influences American government policy, it’s commonly explored in popular culture, and the link between the Masonic eye and the seal on US dollar bills is frequently cited as evidence.

Other well-known Freemasons of note include British authors Rudyard Kipling and Oscar Wilde. In the US, famous Hollywood actor John Wayne was also a Mason. While Freemasonry is open to many, it is common knowledge that many people at the top of society are members or have links to Freemasonry’s prominent members.

The Masonic Fraternity believes that its members have an obligation to give back to their communities, and to benefit others. It is an important point to emphasize that Masons are taught to go about these tasks in a quiet, unassuming fashion. This is meant to impress upon our members that it is the work, and not the individual, that is of importance. It is also to preserve the dignity of those for whom the work is performed. The philanthropic work of our Grand Lodge jurisdiction and its appendant bodies are as follows: